Stay informed on happenings at the ranch 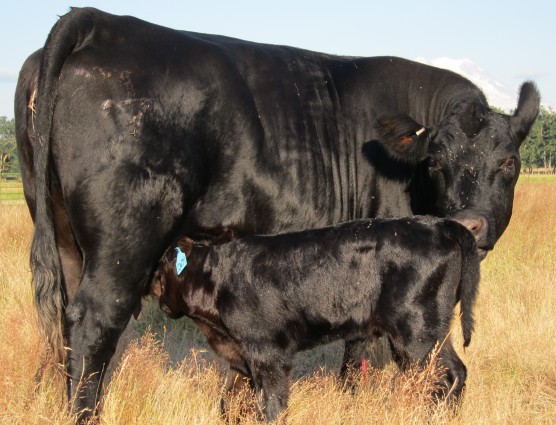 Late yesterday, I came back up to the barn area just after 5 in the afternoon.  I first noticed the cow who lost her calf and has been playing auntie to the calf born the day she lost her calf early in the morning, nursing this calf born later in the day!!!  Auntie had moved from concerned attention to mothering, not a good sign as the real mom was most distressed and heavy with her own milk.  (My assumption and observation indicates that apparently this was happening in large part because the cow-pecking-order placed the auntie cow, who obviously has a very, very strong mother instinct, above the real mom cow, hence her submission to allow the interloper to mother her calf.)

Time to get this auntie mother cow out of the calving herd, a feat I tried to no avail on foot twice previously, including that morning.  A quick period of foot work again proved futile, so I headed to the barn yard madly contemplating what to do about getting her out successfully, when I looked up and there was the heifer who had been most overdue getting ready to calving (heavy, tight, large bag for a couple of weeks!) licking a new calf.  Yeah!!!  The baby was still half encased in amniotic sack, the head half, so I raced over and pulled the heavy membranes off and, voila, the big boy almost instantly started his struggles to stand.  Wonderful!!!

Now back to my cow problem.

I looked up and saw the trio near a fence 200 yards from the barn, so decided I give herding them all three in to the corral system and from there a try to separate the auntie cow.  The cows proved not the least bit cooperative, but the little guy was somewhat cooperative.

Ah Ha!  Move the calf to the corral and I’ll get both the cows.  Off came my belt, I caught the calf around the neck and held his front half in my left hand and his tail in my right and got him to the corral system with some effort but not an unreasonable job, thankful for the cooperation and small size of the little guy (he probably weighs about 85 pounds)!  The cows followed with concern as I knew they would.  Next I succeeded, after a couple of corral adjustments with my calf bait inside the board fences, to get the auntie cow in and then released the 4 day old calf out to his true mom.

All was fine, and the cow who’d lost her calf will be spending the rest of the week in the corral system to get over her loss and her errantly adopted mothering.

Happy, and pooped me, then did my gator hay loading, watering, feeding and got to the house about 7 in the evening for a bit of dinner and welcome glass of wine. Most pleased with the positive accomplishments at the barn, a blessing from powers greater than we, through careful thought and action, resulted in a positive outcome.  Nice way to end a very long day with much accomplished and to be thankful for.

Now for another day on the ranch and it’s very real experiences, struggles, successes and blessings.